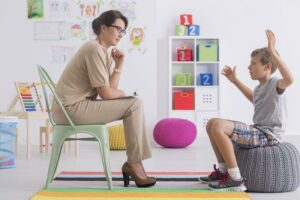 Pravesh Deotale, M.D. is a decorated physician, psychiatrist, medical director, and professor. He has advanced medical degrees, professional experience around the world, and even a recent MBA — a testament to his well-rounded and successful career in behavioral health.

In a discussion with Dr. Deotale, we were able to ask about his perspectives on Autism Spectrum Disorder, support for patients, and the direction of the diagnosis.

This interview was conducted remotely, in line with COVID-19 guidelines.

Can you describe to a layperson the current clinical definition of ASD?

Sure! So, if you look at ASD over the past ten years, several changes have been made to the definition. Basically, when we describe Autism Spectrum Disorder, we are talking about a complex neurodevelopmental disorder that affects the behavior, communication, and social function of a person. Previously, several conditions were included in the diagnosis of Autism, like Autism disorder, Asperger’s Syndrome, or pervasive developmental disorder. But now, all those disorders are combined into the single diagnosis of Autism Spectrum Disorder — and as the name suggests, there is a level of functioning that is decided. At one end of the spectrum, you have someone who is able to succeed in a very traditional school or job, while at the other end one may have significant intellectual impairment and will need an extensive support system throughout their lives. So, as the name suggests, the spectrum is broad and spans across a range — from level one which needs a low level of support to level three, which requires a high level of support.

What caused the recent change in how physicians diagnose and support patients with ASD?

The core difference between the diagnoses when they were separated was the level of functioning, so to integrate more patients into the community and to share more resources was one factor. Another factor was the research that was conducted on patients with ASD — it was very difficult with the separate diagnoses to pool the data and come up with a general consensus or plan for treatment. So, to avoid confusion, Psychiatrists decided that there needed to be a single category for diagnosis so that there are more homogenous services and more integration of the specialty in treating those patients.

How much do we know about the disorder?

Well, right now we don’t know the exact cause of Autism Spectrum Disorder. The current research does demonstrate that there is no single cause for the multiple factors that contribute to somebody developing an ASD. Having even an immediate family member with ASD is a risk factor, as are genetic conditions, being born to older parents, fetal exposure to medications, et cetera.

Special thanks to Dr. Pravesh Deotale and the IPC BusDev Team. Look forward to the next article, covering our discussion about Autism Spectrum Disorder.